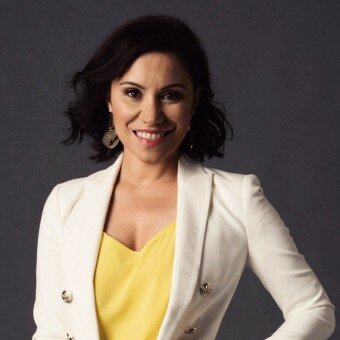 Stacey Morrison is infamous for her seemingly never ending energy and ability to juggle multiple projects across different media platforms all the while balancing family life including being a dedicated mum to her three gorgeous children. As a radio host her enthusiasm has been likened to a shot of caffeine for listeners.

An experienced broadcaster and television personality, Stacey is also a popular MC and speaker at corporate events and we’re delighted to have her hosting Crazy & Ambitious 2. Her corporate CV is wide -ranging: from the Maori Sports and Media Awards and the Young Sports Person of the Year, to the Bluff Oyster Festival and the Netball World Championships.

Brimming with positivity, she’s a popular motivational speaker for young people, and regularly speaks at the Halogen Foundation’s National Young Leaders Day. A self -confessed fashion junkie, she has hit the runway for local designer Charmaine Love at the Style Pasifika Show at New Zealand Fashion Week and MCed both the Auckland Cup Week Derby Day Fashion Show and for local label Lippy ‘s fashion show.

Hailing from Christchurch, Stacey is fluent in te reo and studies advanced Maori language courses. She works to promote Maori culture, language and health and along with her husband, fellow broadcaster Scotty Morrison, does consultancy work for shows with Māori content like CODE, Find Me a Māori bride (upcoming). They run a community play group and teach te reo under Māori 4 Grownups, now an inc. society.

Stacey’s boundless energy and professionalism has seen her branch out into numerous fields – she’s a columnist for New Idea , on the council of Family Planning NZ , an ambassador for NZ Water Safety and NZ ambassador for the Breast Cancer Society. She has been a goodwill ambassador for the United Nations Population Fund (UNFPA )and worked on the organisation’s Face to Face campaign which supports international women’s rights. She was also a sponsor of the Duffy Books in Homes programme, and worked on fundraisers for Variety, the children’s charity.